As many Rugby League fans will know, Paul Gallen is an Australian professional Rugby League lock, prop and second-row forward who has spent his entire career with Cronulla Sutherland-Sharks. Paul will be jetting in from Sydney, New South Wales for THREE exclusive events.

Since making his debut in 2001, Paul has made 329 appearances scoring 62 tries totalling in excess of 248 points for the club. The Sharks skipper has also appeared in 32 tests for the Australlian National Team and 24 appearances for NSW. In 2018, Gallen became the only player in NRL history to notch up 50,000 running metres!

Not only is Paul one of the greatest Rugby players of all time, but he is also an undefeated Heaveyweight Boxer! Gallen first entered the ring in 2014 and has since notched up a total of 9 victories in the ring. The most recent in February of 2019 with a TKO vs John Hopgate in Sydney.

On the night, we will hear everything direct from Paul Gallen as he talks us through his career at the top level, the highs, the lows, the battles, the controversy and Rugby League as a whole. There will also be the opportunity to ask Paul a question as part of our audience Q&A.

This event is NOT to be missed!

Individual and group bookings are accepted.

Standard tickets – £35
– Entry to the event and all the evenings entertainment.
– Meet and greet plus your photograph taken with Paul Gallen. 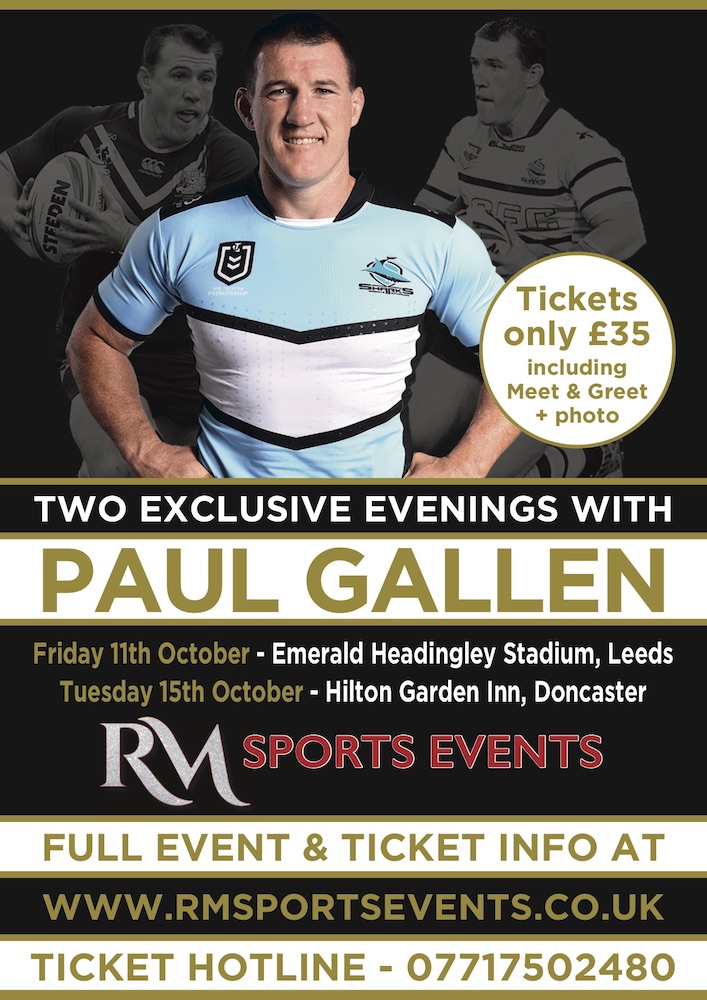 Standard Tickets
– Entry to event and all evenings entertainment
Meet and greet plus photo.
£35 + £2 booking fee