WE ARE LEEDS – AN EVENING WITH JOSH WARRINGTON, JAMIE PEACOCK & JERMAINE BECKFORD!

RM Sports Events are delighted to welcome not one, not two… but THREE Leeds legends to the Emerald Headingley Stadium on Friday 8th October. This event is set to be a fantastic occasion as we talk about and celebrate all things LEEDS!

On the night we will hear from each of our guests as they talk us through the highs and the lows of their careers in Boxing, with Leeds Rhinos and with Leeds United respectively.

The Leeds Warrior has a fantastic record of 31 fights and 30 wins, 7 of which are by knockout. Josh’s career peaked when he won the IBF Featherweight World Championship against Lee Selby in front of a packed Elland Road in May 2018.

Renowned for his mass following and capacity shows, Josh has firmly established himself as one of the most recognized fighters in Boxing.

On the night, we will hear from Josh about his past, present and future.

Jamie Peacock is widely renowned as one of the greatest Super League players ever! With 47 caps for England and Great Britain (captaining both) Jamie has played at the highest level for both club and country.

During his club career, Peacock has been there, done that and got many t-shirts, accolades and medals. With 9 Grand Finals, Four Challenge Cups and Four World Titles to his name it’s safe to say Jamie is a true great of Rugby League.

On the night we will take a trip down memory lane as we cover Jamie’s career with Leeds Rhinos, in which he won the historic treble which was secured during his final game for the club at Old Trafford in 2015.

Jermaine Beckford has written himself into Leeds United folklore on more than one occasion. With 71 goals in his 126 appearances for the club, Beckford is an LUFC legend.

January 3rd 2009 is a day that will be forever remembered in the minds of Leeds United fans. The Whites found themselves at the top of League One and drawn away to arch-rivals Manchester United for a 3rd Round FA Cup tie. Huge underdogs for the game, Leeds went into the game with little, to no expectations. Up-stepped Jermaine Beckford, who scored the only goal of the game, knocking out Manchester United in the third round, for the first time in Sir Alex Ferguson’s career.

Jermaine will talk us through that famous goal at Old Trafford, as well as the goal he scored on the final day of the League One season to secure Leeds United’s return to The Championship.

We look forward to Marching On Together with you later this year!

Standard £35
– Entry
– Full nights entertainment including interviews and Q&A on stage
– Seated on tables of 10
Please Note: £5 from each ticket sold will be donated to MNDA (Motor Neurone Disease Association) 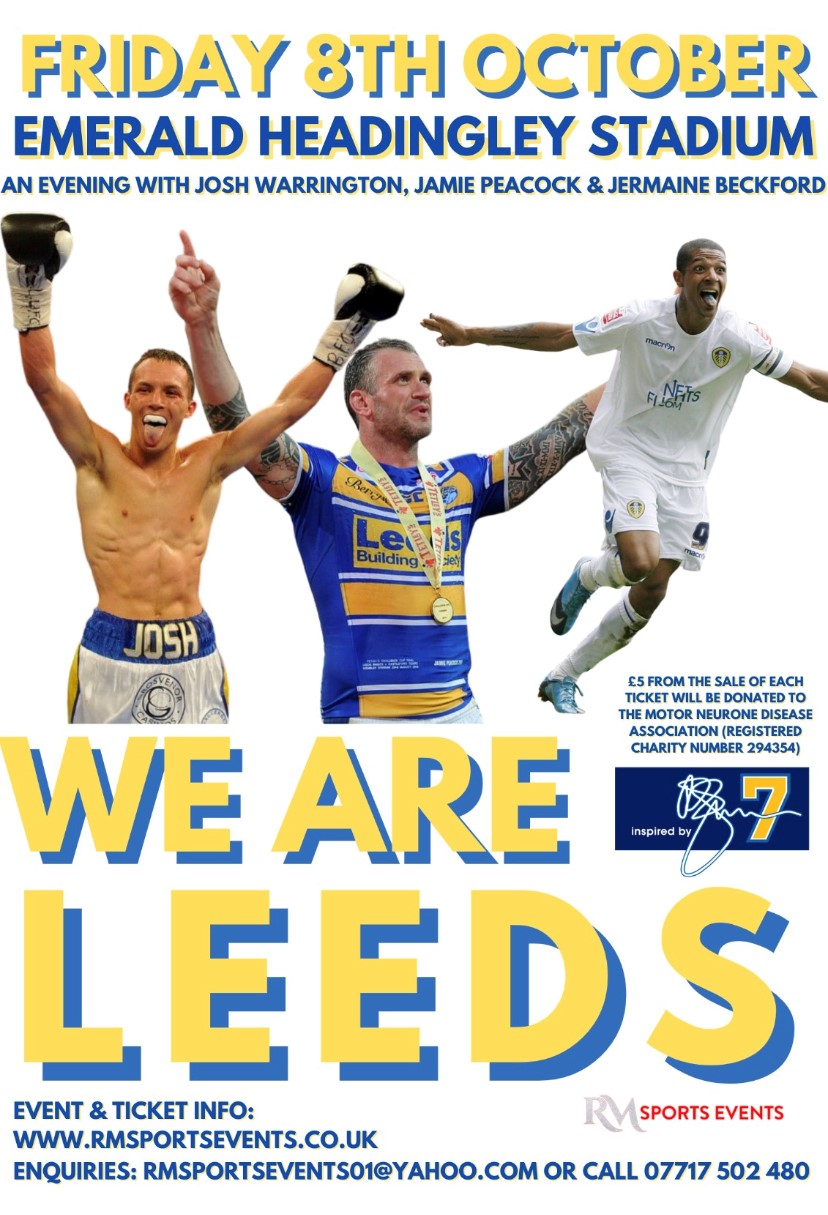 Food will not be available on the night.